A Campaign for Preservation

A Signature Landscape
Telluride is a National Historic Landmark District located at the end of a glacially formed box canyon; the Valley Floor its gateway, a landscape that distinguishes this mountain resort town from others. To access the Town of Telluride one crosses the Valley Floor; three miles of mountain meadows clustered with cottonwoods, evergreens and wetlands. UN Ambassador Richard Holbrooke said in 2003, “It’s a magical moment when you hit that field, driving from Montrose or the Telluride airport.”

History
Formerly the summer hunting and camping grounds of Ute Tribes and later the site of San Miguel City, placer mining and dairy farms, the south side of the Valley Floor saw only cattle grazing from the 1950’s through 2007. Residential development lines the north side of the highway leading to Telluride, while the south side—a parcel of approximately 570 acres—remained open space. The National Trust for Historic Preservation, the nation’s largest preservation organization, placed the Valley Floor on its list of “America’s 11 Most Endangered Historic Places” in 2001.

Ecology
Although mining and agriculture have impacted this landscape, studies indicate that it retained its biological integrity and diversity. The area is a deer and elk corridor and occasionally see the elusive Canada lynx. A scientific study conducted by Sustainable Ecosystems Institute in 2002 yielded at least five new species, a new genus of insect and confirmed the valley as habitat for the endangered southwestern willow flycatcher.

A 3-mile reach of the San Miguel River, one of the few remaining undammed rivers in Colorado, flows through the length of the property. Six perennial tributaries feed the river within the Valley Floor.

Aquatic ecosystems are critical habitat for native species and richest in species diversity, supporting a host of amphibians, resident and migrating birds, fish, mammals, insects and plants. In the Southern Rockies, biologists have found that wetlands and riparian ecosystems support 80 percent of vertebrates. The Valley Floor comprises the largest complex of riparian, wetland and fen (ancient peat wetlands) ecosystems in the San Miguel Watershed. These wetlands purify water by filtering sediment and pollutants. They store water to supply the river during the low runoff periods of fall and winter. They mitigate down-valley flooding. Ecologically, the Valley Floor is the heart of the San Miguel Watershed.

A Citizen’s Initiative for Open Space
In 2002, a citizen-initiated ordinance was presented to the voters of Telluride. It asked the Telluride Town Council to pursue eminent domain—a government’s right to acquire private property for “public use” for “just compensation,” also known as condemnation. The ordinance, which passed by a 63 percent majority, stipulated that upon acquisition of the property, Telluride would place the land under a conservation easement to be preserved as open space in perpetuity.

The Colorado Constitution grants local governments the power of eminent domain. Municipalities like Boulder, Colorado used eminent domain to acquire open space, as did New York City to acquire the land for Central Park. In March 2004, Telluride filed a petition for condemnation. 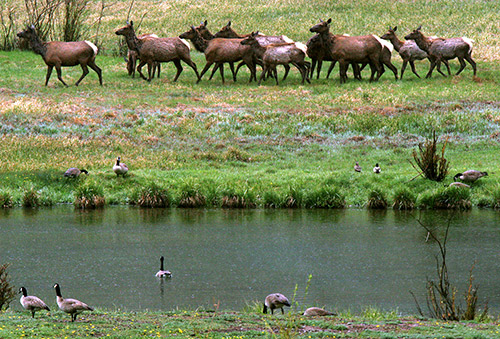 The Legal Case
Soon after, the landowner of the Valley Floor, San Miguel Valley Corporation (SMVC) lobbied State lawmakers to add an amendment to an eminent domain bill. House Bill 1203 intended to curb condemnation abuses in urban renewal settings, preventing governments from condemning property and selling it to private developers. But the “Telluride Amendment” had different aims: to make it illegal for municipalities to condemn land outside its boundaries for open space and applying it retroactively to apply to Telluride’s condemnation action. It passed by one vote in the senate and was signed by Governor Bill Owens in June 2004, compromising Telluride’s condemnation action. Immediately following the Governor’s action, SMVC appealed to the district court to dismiss Telluride’s condemnation case.

In October 2004, a district court judge rejected SMVC’s arguments, dismissing H.B. 1203’s application to the Valley Floor case, based on statutory interpretation and precedent-setting Colorado court decisions. The judge held that a home-rule municipality’s right to pursue eminent domain outside of its boundaries is granted by the Colorado Constitution and cannot be denied by act of the legislature. Furthermore, he required that both parties attempt to come to an agreement via mediation. If unsuccessful, the case would be settled in a valuation trial.

Mediation led to a new development plan, which called for a residential pod with private open space on the Valley Floor and annexation and development of SMVC’s surrounding acres. After giving this plan serious consideration, the Telluride voters again elected for condemnation. The valuation trial was rescheduled for February 2007 with the land value frozen in January 2006.

SMVC successfully petitioned the court to move the jury trial outside of San Miguel County to neighboring Delta County. After being presented with evidence that supported both Telluride’s $26 million appraisal and SMVC’s $50 million appraisal, a jury of Delta County residents declared the value of the land to be $50 million, and the judge ordered the Town to deposit the funds by mid-May.

The Fundraising Campaign
A 2007 Telluride Visitors Center survey found that over 96 percent of visitors rated the scenic beauty of the region as paramount to enjoying their trip to Telluride. Telluride has a long history of support for acquisition and preservation of open space. In 1993, the Town created the Open Space Commission after residents voted to set aside 20 percent of the Town’s annual unencumbered tax revenues to be used for acquisition, management and preservation of open lands. An Open Space Commission survey found that preserving Bear Creek and the Valley Floor the community’s open space priorities.

In November 2002, Telluride voters approved $10 million in open space bonding capacity for the acquisition of the Valley Floor. In November 2007, voters approved an additional $10 million. At the time of the valuation, Telluride had $25 million in open space funds and voter-authorized open space bonding available to purchase the Valley Floor. In addition, more than 130 individuals had offered personal support for the acquisition with pledges and donations exceeding $8 million. At the time of the $50 million valuation the total funding available for acquisition was approximately $33 million.

Valley Floor Preservation Partners
Valley Floor Preservation Partners (VFPP), a 501(c)3 nonprofit organization, was established in March 2006 to support the town’s acquisition and preservation efforts and to launch a final fundraising and education campaign. VFPP was formed as a partnership of the Town of Telluride, Sheep Mountain Alliance, The National Trust for Historic Preservation, The Telluride Institute and regional citizens, who joined together to move the acquisition effort forward. VFPP’s task in February 2007 was to raise the remaining $17 million in three months.

After a true grassroots community campaign, VFPP raised the funds necessary for the $50 million—plus interest—deposit with the court. Nevertheless, in April 2007, SMVC appealed the district court’s decision to allow the Town’s condemnation to proceed based on the State’s new condemnation law. They appealed the issue directly to the Colorado Supreme Court, and oral arguments for the case were heard on January 22, 2008. On June 2, 2008 the Colorado Supreme Court rendered a 6 to 1 decision in favor of the Town, stating that the State law was unconstitutional and Telluride’s condemnation of the property was lawful. Possession of the property officially transferred to the Town on June 20, 2008.

Preservation and Restoration
Telluride’s condemnation ordinance stipulated that the Valley Floor property be preserved as open space in perpetuity through a conservation easement administered and retained under an appropriate land conservation entity. In June 2009, Telluride donated the conservation easement for the property to the San Miguel Conservation Foundation, a local 501(c)3 land trust formed in 1993.

The conservation easement prohibits the placement of permanent structures and other activities that may degrade the property’s conservation values. It provides for the restoration of the property’s natural features and ensures specific recreational and educational uses, such as nature walks and areas for hiking, bicycling, running, nordic skiing, hangglider and paraglider landings and other public park purposes not requiring improvement of the land.

While the preservation of the Valley Floor has long been valued as a means to protect its natural resources, wildlife habitat and open space, we also view the property as a tremendous educational resource. Preserved as a living classroom, the Valley Floor is a rare and valuable tool for the scientific education of local children and adults and many more who come to Telluride because of its unique and natural setting. Connecting people with nature promotes increased environmental literacy among our community’s citizens and guests and serves to foster a culture that values the continued responsible stewardship of public access and open space.

The Challenge Ahead
The overriding vision for the Valley Floor continues to be preservation of scenic views, protection and restoration of its natural resources, and appropriate recreational and educational uses. VFPP formed as a coalition of key community entities whose shared mission to unite the community around a historically contentious issue, enabled the success of this unprecedented conservation campaign. As an extended community, we all wish to protect and preserve Telluride’s remarkable physical character, historic integrity, and quality of life for generations to come.